Job to be done

Every product should have a single job that it strives to do. We use the Jobs to be Done (JTBD) framework. Fleet's overarching job to be done is the following:

"I need a way to see what laptops and servers I have and what I need to do to keep them secure and compliant."

The product team is responsible for sub-OKRs that contribute to organization-wide OKRs.

The following list includes the company-wide objectives, product objectives ("How?" sections), and whether or not the product team hit or missed each objective:

Fleet + osquery gives organizations the ability to see an almost endless amount of data for all their devices. We want to build on this reputation by consistently providing the freshest, most accurate, and most understandable data possible in the UI and API.

Fleet differentiates itself from other security tools by providing a simple and easy-to-use API and CLI tool (fleetctl). This allows users and customers to leverage Fleet's superb ability to gather device data in unique ways to their organization.

Who's watching the watchers

Many current Fleet users and customers hire Fleet to increase their confidence that other security tools are functioning properly. We will continue to expose valuable information about these tools to meet customer requirements.

Fleet is poised to enable an organization's employees to resolve issues with their devices on their own. This saves for IT administrators and security practitioners, but it also builds trust so that an organization can focus on achieving its business outcomes together.

We'd like to make maintaining secure laptops and servers as easy as possible.

The product team is responsible for product design tasks. These include drafting changes to the Fleet product, reviewing and collecting feedback from engineering, sales, customer success, and marketing counterparts, and delivering these changes to the engineering team.

Priority drafting is the revision of drafted changes currently being developed by the engineering team. Priority drafting aims to quickly adapt to unknown edge cases and changing specifications while ensuring that Fleet meets our brand and quality guidelines.

What happens during priority drafting?

These are effectively internal SLAs. We moved away from the term "SLA" to avoid potential confusion with future, contractual Service Level Agreements Fleet might sign with its customers.

≤Five business days from when the initial request is weighed by PM, requestor has heard back from the group PM whether the request will be prioritized.

≤Six weeks from when the initial request is weighed by PM, this is released into the hands of the Fleet community, generally available (no feature flags or limitations except as originally specced or as adjusted if necessary).

≤Five business days from the initial request, an issue is created with a summary of the purpose, the goal, and the plan to achieve it. The level of detail in that plan is up to the PM of the product group. The issue also has an estimation, expressed in story points, which is either determined through planning poker or a "timebox."

For the Interface group, "estimated" means UI wireframes and API design are completed, and the work to implement them has been estimated.

≤One business day from discovering some blocker or change necessary to already prioritized and estimated work. The group PM decides how the usage/UI will be changed and notifies the original requestor of changes to the spec.

NEW feature that have been added to Figma Fleet EE (current, dev-ready): 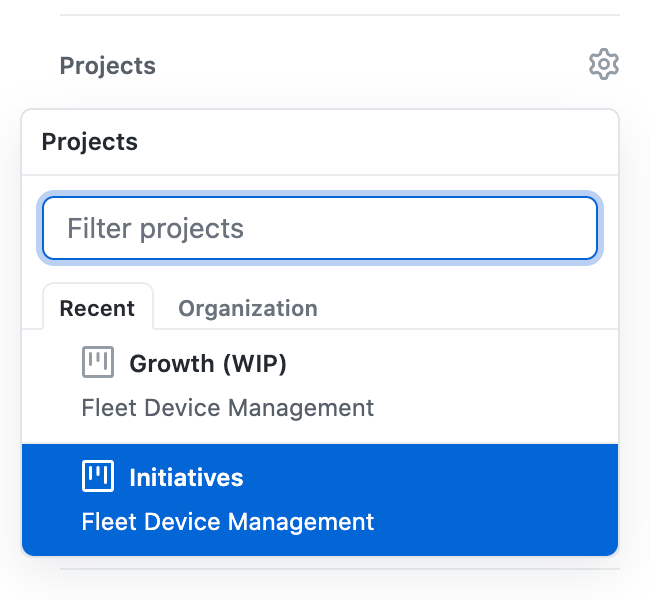 NOTE: Artwork and layouts in Figma Fleet EE (current) are final assets, ready for implementation. Therefore, it’s important NOT to use the "idea" label, as designs in this document are more than ideas - they are something that WILL be implemented. 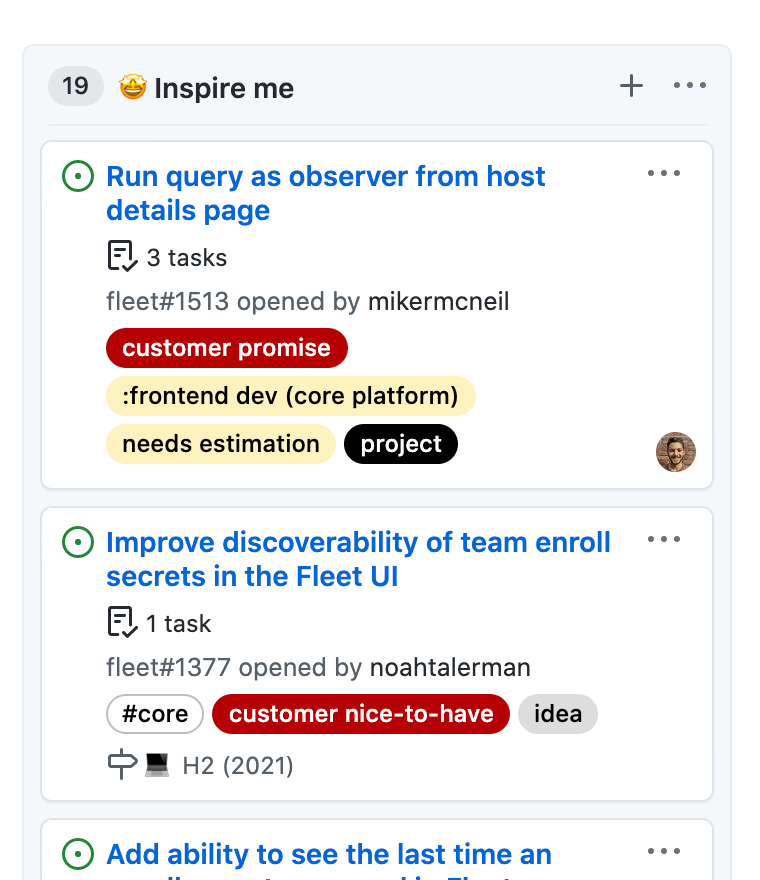 For issues related to something that was ALREADY in Figma Fleet EE (current, dev-ready), but implemented differently, e.g., padding/spacing inconsistency, etc. Create a bug issue and detail the required changes.

We have certain design conventions that we include in Fleet. We will document more of these over time.

Use ---, with color $ui-fleet-black-50 as the default UI for empty columns.

Pressing the return or enter key with an open form will cause the form to be submitted.

For text links that navigates the user to a different page within the Fleet UI, use the $core-blue color and xs-bold styling. You'll also want to make sure to use the underline style for when the user hovers over these links.

For a link that navigates the user to an external site (e.g., fleetdm.com/docs), use the $core-blue color and xs-bold styling for the link's text. Also, place the link-out icon to the right of the link's text.

All tooltips change the cursor to a question mark on hover. All tooltips have a solid background color.

This section outlines the communication between the product team, growth team, product team, and customer success team prior to a release of Fleet.

Keep the business up to date with improvements and changes to the Fleet product so that all stakeholders can communicate with customers and users.

The release blog post issue includes a list of the primary features included in the upcoming release. This list of features should point the reader to the GitHub issue that explains each feature in more detail.

The release blog post issue is filed in the private fleetdm/confidential repository because the comment section may contain private information about Fleet's customers.

The following highlights should be considered when deciding if we promote a feature as "beta:"

At Fleet, features are placed behind feature flags if the changes could affect Fleet's availability of existing functionalities.

The following highlights should be considered when deciding if we should leverage feature flags:

At the 🗣 Product office hours meeting, the product team weighs all requests. When the team weighs a request, it is prioritized or put to the side.

The team prioritizes a request when the business perceives it as an immediate priority. When this happens, the team sets the request to be estimated or deferred within five business days.

The team puts a request to the side when the business perceives competing priorities as more pressing in the immediate moment.

At Fleet, we use objectives and key results (OKRs) to align the organization with measurable goals. These OKRs fill up a large portion, but not all, of planning (drafting, wireframing, spec'ing, etc.) and engineering capacity.

This means there is always some capacity to prioritize requests advocated for by customers, Fleet team members, and members of the greater Fleet community.

At Fleet, we tell the requestor whether their request is prioritized or put to the side within one business day from when the team weighs the request.

The 🗣 Product office hours meeting is a recurring ritual to make sure that the team weighs all requests.

All members of the Fleet organization are welcome to attend the 🗣 Product office hours meeting. Requests will be weighed from top to bottom while prioritizing attendee requests.

In order to understand the usage of the Fleet product, we collect statistics from installations where this functionality is enabled.

Directly Responsible Individuals (DRI) engage in the ritual(s) below at the frequency specified.