Render is a cloud hosting service that makes it dead simple to get things up and running fast, without the typical headache of larger enterprise hosting providers. Hosting Fleet on Render is a cost effective and scalable cloud environment with a lower barrier to entry, making it a great place to get some experience with Fleet and osquery.

Below we’ll look at how to deploy Fleet on Render using Render WebService & Private Service components. To complete this you’ll need an account on Render, and about 30 minutes.

Fleet only has 2 external dependencies:

First let’s get these dependencies up and running on Render.

Fleet uses MySQL as the datastore to organize host enrollment and other metadata around serving Fleet. Start by forking https://github.com/edwardsb/render-mysql, then create a new private service within Render. When prompted for the repository — enter your fork’s URL here. 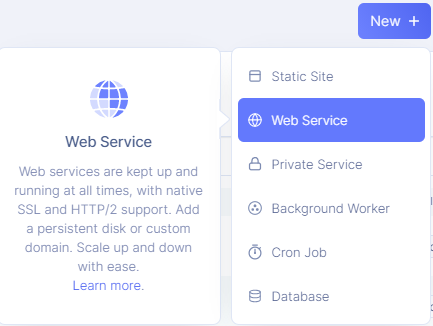 This private service will run MySQL, our database, so let’s give it a fitting name, something like “fleet-mysql”.

We’re also going to need to set up some environment variables and a disk to mount. Expand “Advanced” and enter the following:

The next dependency we’ll configure is Redis. Fleet uses Redis to ingest and queue the results of distributed queries, cache data, etc. Luckily for us the folks over at Render have a ready-to-deploy Redis template that makes deploying Redis as a private service a single mouse click. Check out https://render.com/docs/deploy-redis.

After it’s deployed, you should see a unique Redis host/port combination, we’ll need that for Fleet so make sure to copy it for later.

Now that we have the dependencies up and running, on to Fleet!

Start by forking or use https://github.com/edwardsb/fleet-on-render directly. This Dockerfile is based on Fleet, but overrides the default command to include the migration step, which prepares the database by running all required migrations. Normally it’s best to do this as a separate task, or job that runs before a new deployment, but for simplicity we can have it run every time the task starts.

Back in Render, create a new web service and give it a unique name, since this will be resolvable on the internet, it actually has to be unique on Render’s platform.

Next we will supply the environment variables Fleet needs to connect to the database and redis. We are also going to disable TLS on the Fleet server, since Render is going to handle SSL termination for us.

Give it the following environment variables:

Additionally we’ll configure the following so Render knows how to build our app and make sure its healthy:

Click Create and watch Render deploy Fleet! You should see something like this in the event logs:

Fleet is up and running, head to your public URL.

You should be prompted with a setup page, where you can enter your name, email, and password. Run through those steps and you should have an empty hosts page waiting for you.

You’ll find the enroll-secret after clicking “Add New Hosts”. This is a special secret the host will need to register to your Fleet instance. Once you have the enroll-secret you can use fleetctl to create Orbit installers, which makes installing and updating osquery super simple. Download fleetctl and try the following command (Docker require) on your terminal:

This command creates an msi installer pointed at your Fleet instance.

Now we need some awesome queries to run against the hosts we enroll, check out the collection here.

To get them into Fleet we can use fleetctl again. Run the following on your terminal:

Now that we downloaded the standard query library, we’ll apply it using fleetctl. First we’ll configure fleetctl to use the instance we just built.

Next, login with your credentials from when you set up the Fleet instance by running fleetctl login:

fleetctl makes configuring Fleet really easy, directly from your terminal. You can even create API credentials so you can script fleetctl commands, and really unlock the power of Fleet.

That’s it! We have successfully deployed and configured a Fleet instance! Render makes this process super easy, and you can even enable auto-scaling and let the app grow with your needs.